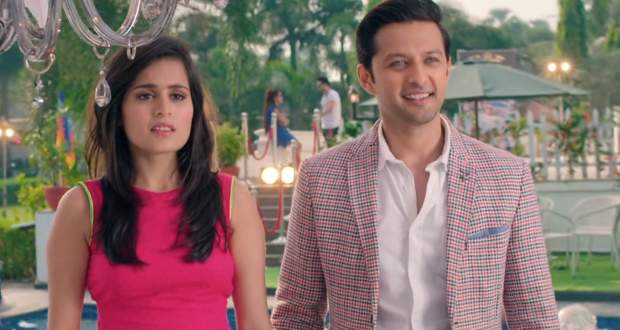 Today's YRHPK 2 Dec episode starts with Varsha asking from Kuhu about being missing from the party. At the same time, Kunal arrives with gifts and wishes Vishambhar and Rajshri.

Kunal also gives a saree without any name and Rajshri knows it is from Abir. Meanwhile, Abir writes his thoughts in Mishti’s diary.

At the same time, Meenakshi sees photographs of girls for Abir. Yashpal arrives and says Abir will never agree while Parul says they will threaten him.

In the morning, Rajshri enquires from Mishti about her well being. Mishti says she is genuinely happy and has moved on. Later, she messages Nannu and ask him to come soon.

Kunal tells Abir that the meeting is at the swimming pool in a hotel while Abir wants him to fulfill the bet with Kuhu before going.

Meanwhile, Mishti accidentally sends a message to Abir but deletes it on time. Later, Abir arrives at the same tea stall and drinks from Mishti’s glass.

Abir saves Nishant from falling in the swimming pool and later they share an introduction. Nishant likes Abir’s app idea while Abir wants everyone to get their love.

Nishant asks Abir to not talk in poetry in front of his girlfriend. Abir learns a lot of similarities between Mishti and Nishant’s partner. Later, Abir and Mishti come face to face and Abir sees her holding hands with Nishant.

Upcoming Yeh Rishtey Hai Pyaar Ke episode update: Mishti falls in the swimming pool and Abir jumps in to save her.

© Copyright tellybest.com, 2018 & 2019. All Rights Reserved. Unauthorized use and/or duplication of this material without written permission from tellybest.com is strictly prohibited.
Cached Saved on: Saturday 30th of May 2020 11:02:19 AM