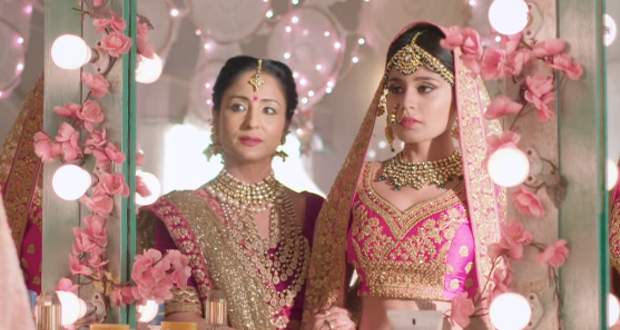 Today's YRHPK 30 Jan episode starts with Kunal asking Kuhu about Abir. Kuhu realizes that Mishti and Abir have a strong connection while Kuhu also gets worried.

Meanwhile, some priests arrive near the lake to worship the Shiv idol. Abir is floating in the water near them while Mishti is not happy at her wedding rituals.

Abir gains consciousness while priests rush to save him. They get him out of the water while he continues to take Mishti’s name. Later, Nishant shows tickets to London for the same day.

Rajshri can see Mishti’s worried state while Jasmeet also thinks Mishti should leave. Rajshri asks for some time to think along with Mishti.

Jugnu suggests they should take Meenakshi’s help. Elsewhere, Rajshri is sure that Mishti is thinking about Abir while Mishti says Abir is in danger.

Rajshri doesn’t want Mishti to do wrong while Mishti says she is suffering. Mishti reveals the whole story about Meenakshi blackmailing Abir.

Mishti requests Rajshri to let her meet Abir one last time. She also promises to return and get married to Nishant. Rajshri agrees to send her but asks her to never return.

Meenakshi calls Nishant and asks him to meet as soon as possible. She asks him about Abir’s whereabouts while he is unable to answer.