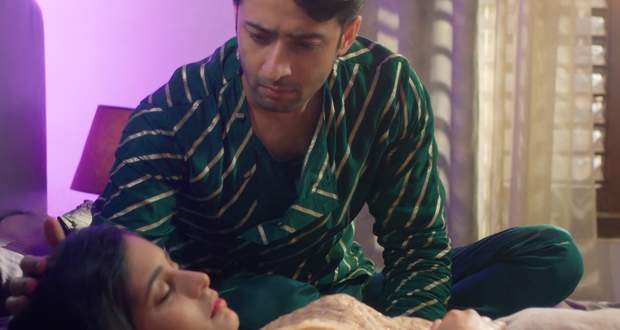 Meenakshi provides them with the task of helping Nirmala in getting her relatives from other places. Meenakshi further interrogates Abir about knowing Varun Soni from before.

Meenakshi further learns that Mishti has met someone named Mandar in the NGO. Later, Abir and Ketki solve their differences while Ketki asks Mishti to help her choose bangles.

The whole family starts the preparations of engagement in high spirits while Varun requests Mishti to help him in his surprise. He gives a pen drive to Mishti and needs help in playing it for his parents.

Mishti tells Abir about the pen drive but is unable to tell about Varun’s brother being in it. Abir invites Nirmala’s relatives through a video call and is praised by everyone for his idea.

Varun and Ketki exchange the engagement rings while later Mishti is asked to play the video. Abir tries to stop Mishti from watching Karan’s picture but ultimately she can see her attacker on the screen.

She gets shocked and collapses on the floor. Everyone rushes to help her while Abir takes her in the room. The family discusses Mishti’s health while Mishti is having a hard time believing the truth.

© Copyright tellybest.com, 2020, 2021. All Rights Reserved. Unauthorized use and/or duplication of any material from tellybest.com without written permission is strictly prohibited.
Cached Saved on: Saturday 23rd of January 2021 12:13:05 PM