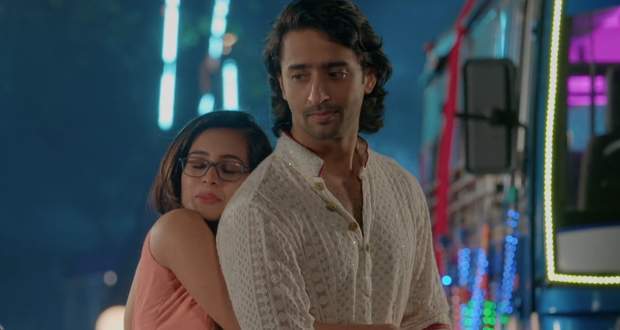 Today's YRHPK 31 Oct episode starts with Abir enquiring from Panditji about Mishti’s arrival. Panditji tells him that Mishti was asking about Mehul.

Meanwhile, Kunal is angry with Mishti and Abir’s engagement. He also overhears Kuhu talking to someone over the phone about doing the acting of being a journalist.

Panditji says there will be a fare organized in the village where some people will come who might know Mehul. She asks Panditji to not tell Abir anything.

Abir arrives and says why she is hiding the truth. At the same time, Kunal arrives inside Maheshwari house with a cake for his two month anniversary with Kuhu.

Abir gets angry at Mishti for hiding things from him. He leaves without listening to her while elsewhere Kunal cuts the cake and apologizes to Rajshri for saying ill things for Mishti.

Kunal feeds a lot of cake to Kuhu and also puts some on her face. Meanwhile, Mishti surprises Abir by wearing the saree given by him.

They both share some emotional and romantic moments. Mishti lies to him about giving him surprise as she wants to start their marriage with Mehul’s house.

Mishti wishes to come back after two days but Abir tells her their engagement is fixed on the same day. At the same time, Mehul starts blaming Meenakshi for investigating.

Later, Kunal accuses Kuhu of playing games and threatens to send the divorce papers. Kuhu says she will be supported by her family but he will lose his family.

Upcoming Yeh Rishtey Hai Pyaar Ke episode update: Abir wants Mishti to get married to him at the same time.