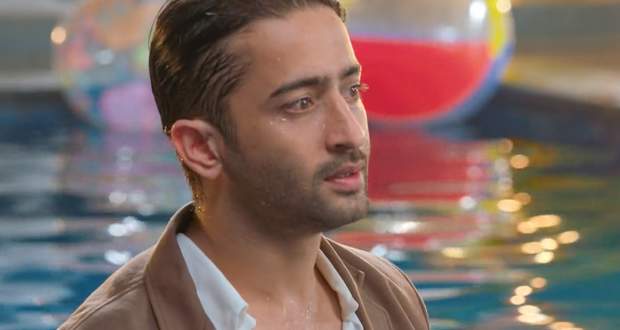 Today's YRHPK 3 Dec episode starts with Nishant introducing Abir to Mishti as his partner. Mishti acts like a stranger with Abir while at the same time Kunal arrives and gets shocked.

Mishti tries to get close to Nishant while Abir thinks they should postpone the meeting. They decide to fix the meeting sometime later.

At the same time, Mishti falls into the swimming pool and Abir jumps in to save her. Mishti and Abir share eye contact while later Mishti says she can take care of herself.

Abir gets really disturbed to learn that Mishti has moved on and drives roughly. He asks Kunal to not tell Meenakshi about Mishti.

Mishti creates a story of a thief in the house for the entry of Nishant. Everyone starts hitting Kuhu who is entering quietly while later Nishant reunites with his family.

Abir wishes to keep the meeting again but in the office. Later, Mishti asks Kuhu about returning to Rajvansh house while Kuhu wants to know what she is hiding in the box.

Maheshwaris decide to throw a welcome party for Nannu. Later, Mishti wants Nishant to tell everyone their truth while he tells her to wait.

He accidentally picks up Abir’s call and he overhears their conversation.

© Copyright tellybest.com, 2018 & 2019. All Rights Reserved. Unauthorized use and/or duplication of this material without written permission from tellybest.com is strictly prohibited.
Cached Saved on: Saturday 30th of May 2020 11:36:58 AM