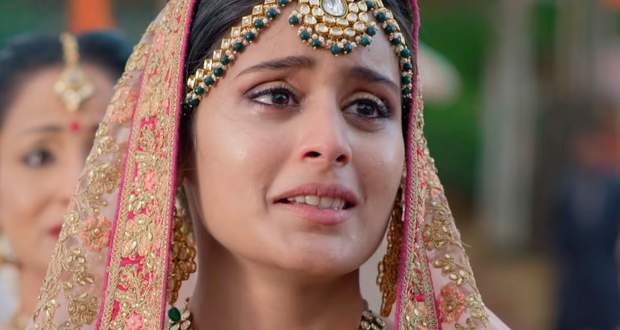 Today's YRHPK 3 Feb episode starts with Abir driving the ambulance and trying to reach Mishti. Mishti calls Kunal and tells him that Abir has taken the ambulance.

Mishti realizes Abir must have gone to her house while Abir stops at the temple. Mishti is unable to see the ambulance and passes by the temple.

Mishti arrives again near the temple and hears the ringing bells of the temple. She further finds the ambulance and gets on top of it. She starts shouting Abir’s name while Abir comes out of the temple.

He also gets on top of the ambulance and both of them share an emotional reunion. Mishti reveals that she has realized her love and wants him to take her away with him.

Abir promises to always stay with her. At the same time, Vishambhar and Meenakshi arrive to spoil their beautiful moment.

Nishant also arrives and wants Mishti to come with him. Vishambhar scolds Nishant for hurting Mishti while Rajshri arrives and says that Mishti won’t marry Nishant.

Jasmeet gets really angry at Mishti while Mishti thinks she can never love Nishant. Nishant asks why he left the house and Mishti confesses her love for Abir.