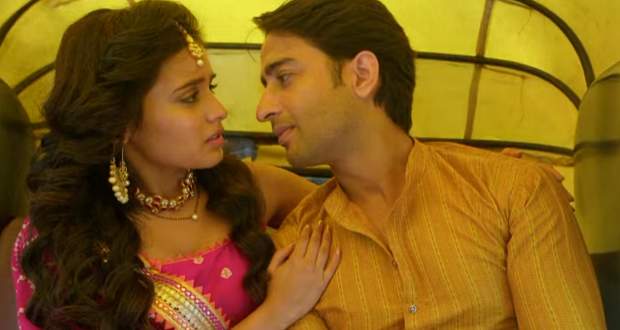 Today's YRHPK 3 Mar episode starts with the doctor asking about Abir eating or drinking something. The doctor takes the blood sample while Abir gets conscious.

Meenakshi is expecting Kuhu and Mishti to fight like cats. Kuhu asks Kunal to arrive soon while Kunal is told by Jugnu that Mishti and Abir are buying some garland.

Jasmeet talks against Mishti while Meenakshi points it out in front of Rajshri. Jasmeet further indicates that they must have gone to a party.

Meenakshi says Abir never drinks while Rajshri is sure Mishti can’t do something like that either. Meenakshi is sure that Mishti will arrive drunk in the temple.

Mishti tries to get ready while Abir gets romantic with her. Later, they leave in an auto for the temple while Meenakshi wants Kunal to search for Abir.

Jasmeet suggests Kunal and Kuhu can do the Pooja while Yashpal agrees. Meenakshi wants Abir to do the Pooja but she is interrupted by Yashpal.

Mishti and Abir reach the temple while Abir is not able to stand properly. Mishti indicates that she is not feeling well and is dizzy. She asks Kunal to start with the Pooja.

Mishti wants to know what has happened to Abir. Meanwhile, Kuhu and Kunal do the Pooja while Meenakshi is disappointed about her failed plan.

Mishti and Abir give prasad to the poor people while Mishti wonders if Kuhu has done it. Meenakshi entices Mishti against Kuhu on purpose and wants to know is Mishti came late on purpose.

Kuhu accuses Mishti of doing what she wants and indicates the Pooja might not be important for her.

© Copyright tellybest.com, 2018 & 2019. All Rights Reserved. Unauthorized use and/or duplication of this material without written permission from tellybest.com is strictly prohibited.
Cached Saved on: Wednesday 8th of April 2020 08:12:17 PM