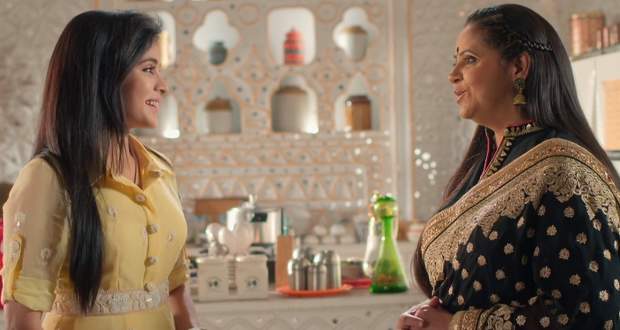 Today's YRHPK 4 Aug episode starts with Varun wishing to leave Rajvansh house. Ketki gets upset and blames Mishti for spoiling her marriage. Nidhi also asks her to stay away from marriage.

Abir tries to console Varun while he again makes a joke. Mishti convinces Varun to stay home while later she decides to bake a cake for everyone.

Meenakshi tries to have a conversation with her and reminds her of the time when she was left alone at the resort. Mishti gets scared thinking about the incident.

Meenakshi wants to know if she waited for Abir in the resort and also wants to reconcile their differences. She further asks what happened that night.

Meenakshi continues to question while at the same time, Abir comes and handles the situation. Later, Kuhu and Varun decide to play truth and dare.

They start playing Kuhu is given the dare to say I love you to Meenakshi. She completes the dare and is scolded by Meenakshi. Further, Varun chooses truth and Kuhu asks him about his broken watch.

Varun starts speaking about his brother while Mishti again feels panicky. The next turn is of Mishti and Varun asks her about her health. Mishti leaves while Abir follows her.

Varun is left all alone and his true face is revealed. He wanted her to confess that she has committed the murder of Karan.