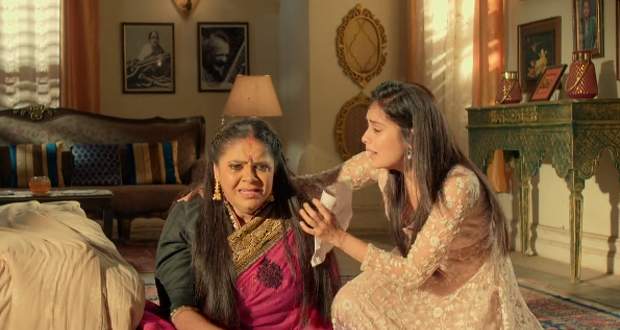 Today's YRHPK 4 Sep episode starts with Abir feeling sorry for Mishti’s condition. Mishti also feels sorry for the problems between him and Meenakshi but doesn’t want to let her come in between their relation.

Mishti learns that Abir is trying to contact the broker. Meanwhile, the Maheshvari family is worried about Mishti while Varsha learns from Kuhu that Abir has decided to leave the house.

Varsha asks Kuhu to support Mishti and Abir. Later, Mishti calls Rajshri and reveals Abir is talking to a broker to get a new house. Varsha asks Mishti to not stay alone and go to Kuhu’s room.

Meenakshi gives a letter to Mishti and asks her to give it to Abir. She reads the letter and finds out Meenakshi is planning to commit suicide. She rushes to save Meenakshi and pushes open the door to save her.

Meenakshi doesn’t want to live as she thinks Abir is not happy. She makes Msihti realize that their love is not enough and her son needs to be a father.

She asks Mishti to leave Abir as he will never leave her. She wants Mishti to know that their relationship is not long-lived as Abir will realize he needs a child one day.

Meenakshi asks Nidhi to keep the Laddu Gopal idol on the table. She wants to use the god idol to make him feel weak. She further hurts Mishti with her harsh words.

Abir comes home and gets sad after seeing Laddu Gopal's idol. Mishti witnesses the scene while Meenakshi’s plan gets successful.

© Copyright tellybest.com, 2020, 2021. All Rights Reserved. Unauthorized use and/or duplication of any material from tellybest.com without written permission is strictly prohibited.
Cached Saved on: Thursday 15th of April 2021 08:06:01 PM