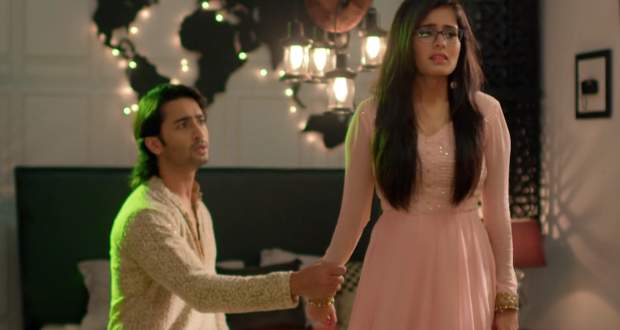 Today's YRHPK 5 Aug episode starts with Parul calling everyone to come for the ritual. Abir enquires from Yashpal about Parul’s secret but he manipulates the whole situation by saying Parul cares for them.

The Maheshwari's come at the Rajvansh house and Mishti ignores Abir. Mishti gets information about Abir doing his bandages alone and rushes to help him.

Meanwhile, Jasmeet distracts Nidhi while Varsha takes a Kundli. At the same time, Mishti takes care of Abir’s wound. She indirectly tries to tell him how she feels.

Abir tries to know what’s going on inside Mishti’s head but she says she just wants Kuhu and Kunal to be happy and nothing else.

Yashpal tells Parul to stall Abir while he takes care of keeping their secret safe. Later, Varsha finds out she has taken the wrong Kundli.

Meenakshi gives the Kundli to Mishti and tells her that she knows about Kuhu’s real mother. She asks Mishti to tell everyone about the truth of Kundli.

She wants Mishti to humiliate her family so that her family disowns her. Mishti gets shocked to learn Meenakshi’s intensions.

© Copyright tellybest.com, 2018 & 2019. All Rights Reserved. Unauthorized use and/or duplication of this material without written permission from tellybest.com is strictly prohibited.
Cached Saved on: Saturday 6th of June 2020 07:15:39 PM