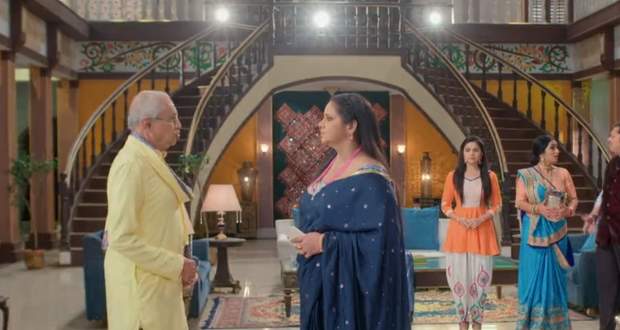 Today's YRHPK 5 Jul episode starts with Saurav’s family coming to see Kuhu. They enquire about the whereabouts of Mishti. Vishambhar says he is proud of his girls and has taught them to stand up against wrong.

Kuhu walks down the staircase and Jasmeet comments she looks exactly like when she was rejected by Meenakshi.

At the same time, Yashpal (Abir and Kunal’s Naanu) comes. He accepts they did wrong by cancelling Kuhu and Kunal’s engagement.

Vishambhar tells he is already searching suitable matches for Kuhu. Yashpal says there is no better relation like Kuhu and Kunal and asks for Mishti’s hand.

Meanwhile, Abir also enters with balloons along with Kunal. Naanu believes they are no one to come in the way of true loves. Mishti and Kuhu both get hopeful.

Abir apologizes for the inconvenience caused to them. Saurav’s parents feel awkward with the whole situation and leave.

Vishambhar asks them to sit and enquires from Kuhu about her feelings. She accepts she has liked Kunal from day 1. Mishti also cuts in and explains everyone how Kuhu was never asked how she feels.

Vishambhar asks Kunal if he feels the same way. He says he does and that they have come to make things right. He gets silent when Vishambhar enquires about Meenakshi.

Meanwhile, Meenakshi tests Parul’s respect for herself. She tells her to believe her.

Vishambhar wants Meenakshi to be okay with the relationship as she is going to be her mother-in-law. Abir tells him she loves her son more than anything.

Vishambhar is still not convinced and tells to end the conversation. Abir promises he will bring his mother.

Shaurya and Varsha ask Kuhu to end the chapter of Kunal, but she says she can’t do it.

Meenakshi asks Kunal to swear on her if he loves Kuhu.

© Copyright tellybest.com, 2018 & 2019. All Rights Reserved. Unauthorized use and/or duplication of this material without written permission from tellybest.com is strictly prohibited.
Cached Saved on: Saturday 18th of January 2020 02:21:42 PMCached Disp on: Wednesday 22nd of January 2020 06:58:08 AM