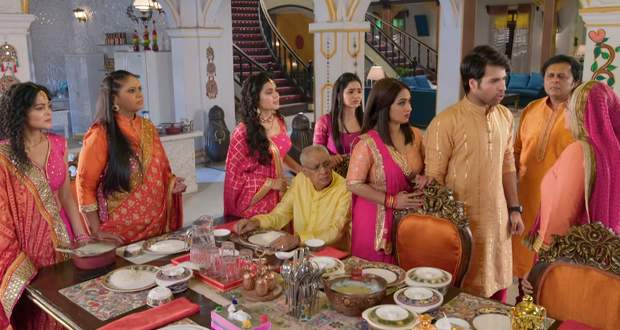 Today's YRHPK 5 Mar episode starts with Jasmeet asking Kuhu to put the blame on Parul. Kuhu doesn’t agree with her and says Parul is a very nice lady.

Jasmeet suggests that Parul is just a servant while at the same time Parul arrives. She asks her to make Kunal eat something while Mishti gets upset with Abir’s state.

Kuhu makes everyone eat something while they are worried about Abir. Nidhi puts blame on Parul for making a coffee that resulted in Abir’s sleepy state.

Mishti recites some poetry to wake Abir up and gets upset. Ketki arrives and takes Mishti along while Abir gains consciousness. Meanwhile, Nidhi accuses Parul of mixing some medicines in Abir’s coffee.

Mishti tries to stop Nidhi while she accuses Parul of wanting her son Kunal to do the Mahashivratri Pooja. Mishti defends Parul while Kunal wants to know why Parul did it.

Abir comes at the same time and stops Kunal from accusing Parul. He feels bad about Kunal’s behavior while Parul defends Kunal’s actions.

Abir wants Kunal to apologize to Parul while Meenakshi wants to know who did it. Abir doesn’t want to investigate and is upset with Kunal accusing his mother.

Meenakshi confronts Mishti and makes her realize that Kuhu must have done it. Later, Mishti confronts Kuhu for not taking a stand for Parul.

Mishti knows Kuhu has done it and is shocked that she did it with Abir. Kuhu reveals that the coffee was meant for Mishti while Mishti slaps her. Mishti wishes to tell Abir while she overhears Kunal and Abir’s conversation.

© Copyright tellybest.com, 2018 & 2019. All Rights Reserved. Unauthorized use and/or duplication of this material without written permission from tellybest.com is strictly prohibited.
Cached Saved on: Saturday 6th of June 2020 10:28:42 PMCached Disp on: Saturday 4th of July 2020 11:51:10 AM