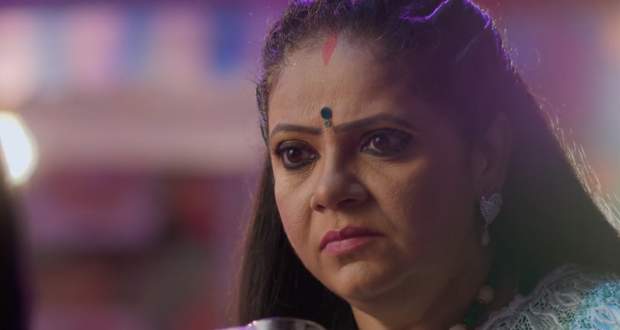 Today's YRHPK 6 Aug episode starts with Meenakshi saying she will insult Vishambhar Maheshwari in front of whole Rajkot. Mishti requests her to not judge Kuhu on basis of her Kundli.

Meenakshi says she has no grudge against Kuhu but she has a problem with her. She demands from her to tell everyone about Kuhu’s reality.

She also threatens to humiliate Kuhu and Vishambhar if she thinks of telling anything to them. Mishti is shattered with the conditions and demands of Meenakshi.

Meanwhile, Kuhu tells Kunal she is misunderstood for being selfish. Kunal feels guilty for leading her on with the fake wedding promise.

At the same time, Varsha comes and asks if she has told Kunal and Kuhu lies about it. Mishti comes and gives the Kundli to Varsha.

Later, Mishti sees a dream of Meenakshi threatening to break the marriage. In the dream, she also sees Abir helping her in getting Kunal ready for marriage.

Varsha sees her requesting in her sleep and tells her nothing bad will happen. She also gives her a gift. Mishti thinks of talking to Kunal about Kuhu’s motherhood.

At Rajvansh house, everyone gets ready for the bachelor’s party. Kunal feels guilty for leading on his own family and Kuhu.

Meenakshi leaves Nidhi at home for the party and leaves with Parul. Later, Parul asks if Meenakshi will try to break Kuhu and Kunal’s relation as well.