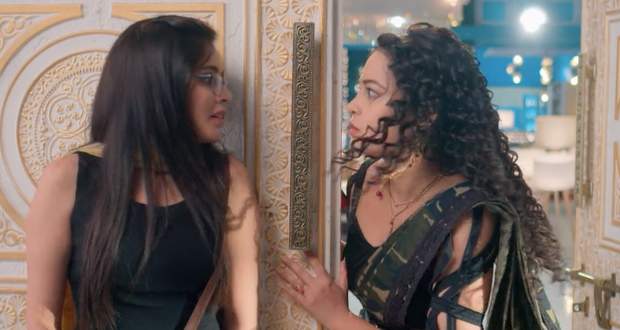 Later, Abir gets upset thinking about his Naanu, Kunal, and Meenakshi getting away from him. At the same time, Mehul arrives and gives an old watch as a gift.

He talks to Mishti on a video call and shows her the watch. He also asks her to meet him in the morning but Mishti denies saying she needs time to get ready.

In the morning, Mishti sneaks out of the house but bumps into Kuhu on her way out. Kuhu wants to know where Mishti is going but Mishti wants her to not tell anyone.

Kuhu covers up for Mishti by telling Rajshri that she has gone for jogging. Meanwhile, Kunal wants to celebrate Abir’s engagement day and not worry about tomorrow.

Kunal has planned something special for Abir and later makes noodles for him. Abir is about to eat when Kunal takes the bite. Everybody takes Kunal’s side and Abir calls out to Meenakshi for help. Meenakshi feeds Abir the noodles and takes his side.

Mishti reaches the temple and opens the photograph of Mehul and Meenakshi. There is a lady beside her with Parul’s photograph.

She finds Parul’s photograph in the temple among the people who went missing.