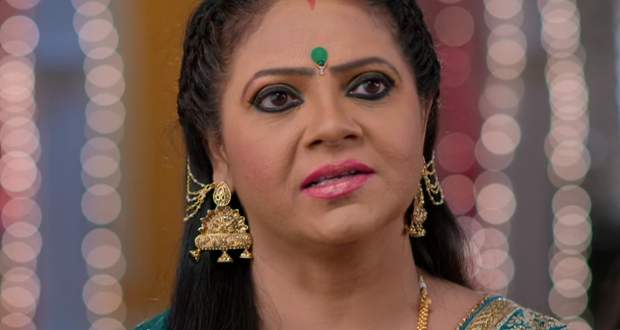 Today's YRHPK 7 Mar episode starts with Kuhu getting surprised with a magic show on her birthday. Mishti and Abir do some magic and surprise Kuhu with many gifts.

She also receives diamond earrings from Meenakshi and Naanu. Kunal gives a dance invite to Kuhu on his company’s letterhead. Parul gives some silver earrings which Kuhu doesn’t accept as she doesn’t wear them.

Meenakshi moves out to get some papers ready while Abir gets suspicious. Meanwhile, Mishti and Yashpal do some acting and Mishti asks for Parul’s earrings.

Meenakshi receives papers from someone else while Abir sees the envelope is of their company. Later, Abir is worried while Mishti receives the earring from Parul.

Abir gets happy to see Mishti happy while later Kuhu feels bad for not accepting Parul’s earrings. Meenakshi tells Kuhu that she can’t get the earrings now as Mishti has taken them.

Maheshwaris arrive at the same time and greet everyone. Later, Meenakshi asks Abir to burn the Holika while Kuhu wishes to do it along with Kunal.

Meenakshi says it is Mishti’s first Holi while Mishti gives the chance to Kuhu as it is her birthday. They all celebrate Holi while later Meenakshi gives a gift to Mishti.

Mishti opens the envelope and learns that she is getting property and business. Kuhu gets shocked to learn this while Kuhu says they worked together in the travel company.

Kunal says Kuhu made a lot of mistakes while Kuhu feels embarrassed. Mishti feels happy while later she falls down and shouts.

Upcoming Yeh Rishtey Hai Pyaar Ke episode update: Mishti lies that she slipped while Kuhu admits that she pushed her.