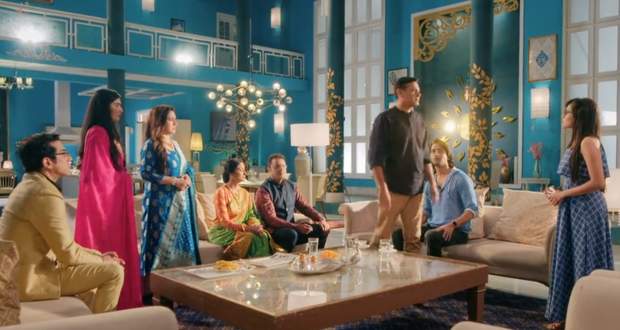 At the same time, Mehul and Abir arrive at Maheshwari's house. Mehul says he always wanted the best girl for Abir while Mishti calls Kuhu.

Mehul asks for Mishti’s hand for Abir while Kuhu hears everything. Abir gets shocked by Mehul’s announcement and wants to talk to his family.

Rajshri says they should include Yashpal and Meenakshi in the decision. Abir and Mishti are compelled to say yes to Mehul’s questions.

Vishambhar also says yes while Varsha gets upset with the sudden change of events. Varsha gives the necklace to Mishti while Kuhu is also stunned with the news.

Later, Abir says he wanted to include Yashpal in the decision. Meanwhile, Kunal doesn’t want Kuhu to not fight with him.

At Rajvansh house, everybody practice for Dandiya competition. Yashpal also plans a surprise for Abir and wants to fix Abir and Mishti’s relation.

Abir arrives and tells his family everything. He tells Mehul has fixed his relationship with Mishti.