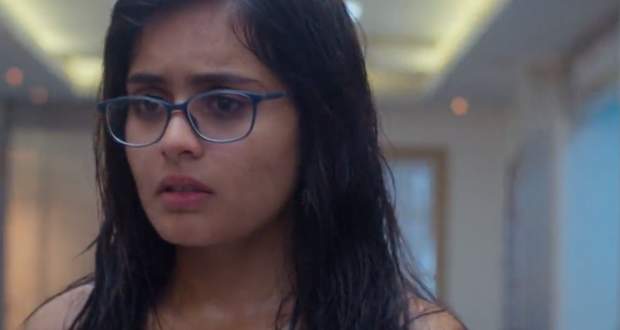 Today's YRHPK 9 Jul episode starts with Kunal searching for his brother in the storm. Kuhu finds out Mishti is missing and puts pillows in her place to fool her mother.

Varsha and Rajshri discuss their meeting with Abir. Varsha wants to go with Kuhu’s happiness and get her engaged with Kunal.

Parul wants Kunal to call Mishti and find out about Abir. She says his ego is not as important as his brother.

Kunal calls Kuhu and enquires about Mishti. He tells her Abir is missing, and maybe she is also searching for him.

Kuhu takes Mishti on the conference and talks sweetly in front of Kunal. Mishti tells about the restaurant at the end of the road and Kunal gets an idea about where to search.

Police stop Mishti and she finds it useless to argue with them. When the police get distracted by Kunal’s car, Mishti runs to the other end of the checkpoint.

Meanwhile, Abir gets conscious in the car and tries to pick up Kunal’s call. The petrol is still leaking along with some sparkling wires in the car.

His foot gets stuck in the steering which later smashes the mirror resulting in a piece of glass getting stuck in his chest.

Mishti gets shocked to see Abir’s condition and tries to open the car door but fails. She asks for help but finds no one the area because of the storm.

Mishti breaks the car window to help him out. She helps him out before the car could get on fire. She gets him to the hospital and gets worried as he is unconscious.

She tries calling his family, but the nurse tells her the networks are not working due to the storm.

Abir wakes up in the morning to find himself in the hospital room with Mishti. He gets delighted to learn about Mishti’s care for him.

When Mishti wakes up, Abir does drama of still being unconscious and is not ready to leave her hand. He pulls her hand even further while Mishti is afraid about anybody watching her like that.

Yashpal gets a call from the hospital to inform about Abir’s accident. Meenakshi gets worried to learn this.

Kunal gets a call from Kuhu stating Mishti is still missing. They both figure out Mishti is the one who saved Abir and took him to the hospital while Meenakshi is also suspicious.