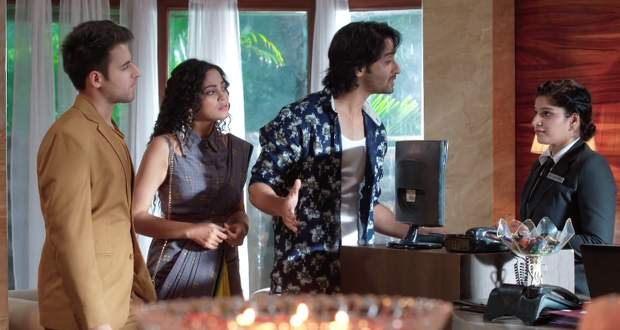 Today's YRHPK 9 Sep episode starts with Kunal and Abir racing on the roads. Abir confronts him about sleeping on the sofa and also enquires about his words to Mishti on the wedding day.

Kunal gets mad at Abir and says he needs to go for a meeting. Meanwhile, Mishti is out with Rajshri to take a walk and Abir reaches the same spot.

Kunal meets the lawyer and asks for some way to get a divorce. Lawyer says he has to prove Kuhu is violent and is mentally unstable.

He advises him to be nice to Kuhu and prove he is being tortured. At the same time, Abir is not able to tell Mishti about Kunal running away on his wedding day.

Mishti says he should talk to Kunal and find out the reality. Meanwhile, Abir says he has to go to Mumbai and he wants Kuhu and Kunal to come along. Kunal agrees to go on the honeymoon.

The doctor says Mishti should consult a specialist in Mumbai and at the same time, Abir calls Mishti to agree with the doctor.

Kuhu gets excited to reach Mumbai while Kunal thinks the trip is crucial for his divorce case. Mishti is also in the same hotel and gets a text from Abir.

Abir sends Kuhu and Kunal in their room and meets Mishti. Later, Meenakshi also reaches Mumbai when she learns she is getting calls from there.